The Public Order Emergency Commission started hearing from federal officials for the first time on Monday, as it continues the inquiry into the federal government’s invocation of the Emergencies Act to end the “Freedom Convoy” protests.

First up on the witness stand on Monday were Rob Stewart and Dominic Rochon. Both were working for the Department of Public Safety—which is also responsible for national security and emergency management— during the protests in January and February.

Stewart was the deputy minister, and Rochon was the senior assistant deputy minister of public safety’s national and cyber security branch. During their testimony the pair spoke about their roles, about the federal government not foreseeing that the convoy would be as big and stay as long in Ottawa as it did, and about how they thought there were shortcomings in the information and intelligence gathering.

Both officials have recently moved on to other roles within the federal government.

Then the commission heard from Global Affairs Canada official Cindy Termorshuizen and Joe Comartin, who was consul general of Canada in Detroit during the protests.

Their testimony touched on the international dynamics, attention and disinformation surrounding the protests, the impact of the border blockades, conversations they had with U.S. officials, and concerns about foreign crowdfunding efforts. During their testimony, footage from international news organizations including Fox News and CNN was played, demonstrating how widely watched the protests were across the world.

All this week, the commission is scheduled to hear from top federal public servants about the government’s use of the Emergencies Act, and the role various departments played in co-ordinating intelligence and information across departments, to various levels of government, and law enforcement agencies in the lead up to making the call to enact the unprecedented powers.

Here’s a roundup of the key moments from Monday’s witnesses.

One of the most notable takeaways from Monday’s hearing came during cross-examination of the pair of public safety witnesses, by a lawyer representing the “Freedom Convoy” core organizers.

Pulling up evidence provided to the inquiry by the Canadian Security and Intelligence Service (CSIS), the commission learned that agency director David Vigneault warned in the days leading up to the invocation of the Emergencies Act that “there did not exist a threat to the security of Canada as defined by the service’s legal mandate.”

CSIS was of the position that that ideologically motivated violent extremism (IMVE) was not a threat posed by the protests, and that amid the anti-COVID-19 and anti-government demonstrations it had assessed “no indicators that known IMVE actors were planning to engage in violence.”

This appeared to be in direct contrast to the federal government asserting in its invocation of the Emergencies Act, that the protests posed a threat to national security, with threat of political violence as one of the factors.

Here is the CSIS assessment of the Freedom Convoy threat on Feb 3. CSIS determined that “no indicators” of idealogically motivated violent extremism (IMVE) but concerns that invoking Emergencies Act would lead to more radicalization and increase # of Cdns with anti-govt views. pic.twitter.com/jK8hqcVQg7

According to the Emergencies Act, a public order emergency—the kind of emergency the federal government declared—has to be one that comes from “an emergency that arises from threats to the security of Canada and that is so serious as to be a national emergency.”

But according to the CSIS director’s evidence—a pre-interview ahead of his public testimony next week—he was of the view that “at no point” did the protest pose a threat to Canada’s security, nor were there signs of foreign state interference, as these factors are defined under the CSIS Act.

Responding to this, Monday’s witnesses sought to argue that the government didn’t have to determine a national security threat based on the narrow definition set out by CSIS, and that in cabinet’s view the threshold was met.

“When it comes to national security, we are not looking for one specific threat, like a terrorism threat. But rather the impact of Canada’s ability to maintain the security of its institutions, democracy, its people, its economy. The resilience of all of these things,” Rochon said, calling intelligence “not foolproof.”

“Just because you have a piece of evidence or a piece of intelligence rather, doesn’t mean that you have the full picture. And, it becomes a very difficult mosaic to try and pull together in terms of pulling together intelligence emanating from CSIS, emanating from police forces, emanating from Canada Border Services Agency. Pulling that picture together to determine whether there’s a national security threat is a different proposition than indicating whether or not CSIS specifically had evidence of a violent extremism meeting their threshold,” he said.

Building on an already well-established theme emerging from these hearings—federal frustration over Ontario’s apparent absence—the commission heard Monday that public safety officials felt it was “never clear whether the Government of Ontario was willing to assist Ottawa,” and that Ontario was “treating Ottawa as Washington, D.C.”

Asked by a commission lawyer to explain what he meant by this, Stewart didn’t really clarify, though it appeared that it was either an effort to indicate how not-their-jurisdiction the situation was in Ontario’s mind, or he was offering an example of how another capital city handles jurisdiction for policing protests. Here’s what Stewart said, in part.

Stewart says Province were treating Ottawa like Washington DC – like it was strictly a federal and local issue.
Lurking in the background in call w/ ministers was “Where was Ontario?”
See intv. summary note below pic.twitter.com/B3Q9PNQBvr

“We were talking about a situation where it had clearly gotten out of control, and it had become illegal. And notwithstanding that the Ottawa police were being backstopped by the OPP and the RCMP, there was clearly more that needed to be done—and ultimately was— to add, you know, tools and powers to address the situation. And this was lurking in the background on all the calls that we had with ministers, was ‘where is Ontario?'”

‘HAD NO INTENTION’ OF MOBILIZING MILITARY

Building on an area that got some attention late last week—contemplations around engaging the military—on Monday the commission heard that as of Feb. 6 the then-deputy minister of public safety confirmed to City of Ottawa manager Steve Kanellakos that the federal government “had no intention” of mobilizing troops to deal with the protests that had become entrenched in the downtown core.

This testimony comes after last week, when written notes from one of Prime Minister Justin Trudeau’s top aides were entered into evidence indicating that right up to the invocation of the Emergencies Act, it was the prime minister’s position that calling in the military remained a “last resort.”

This detail from PMO deputy chief of staff Brian Clow was part of his notetaking he did during a key call between the federal and provincial governments on Feb. 14, just hours before the Emergencies Act was invoked, in which all premiers offered their ranging perspectives on the forthcoming powers.

According to Clow’s notes, Trudeau said “military is last resort,” in addressing concerns raised by Northwest Territories Premier Caroline Cochrane, who is quoted in Clow’s notes as saying, “I really don’t want to see bloodshed.”

“I support the emergency measures, but if you’re thinking army, consult us again,” Cochrane said.

On this, they agreed, Trudeau indicated.

In the midst of the protests, Trudeau had also made it clear publicly that the rarely taken prospect of calling in the Canadian Armed Forces was not actively being considered.

One way that the military did help, it was revealed on Monday, was through delivering food rations to the Parliamentary Protective Service during the protests. According to evidence presented, on Feb. 16 the federal government received a request from assistance from the force responsible for Parliament Hill security asking for 1,200 non-perishable food rations for their employees in the “red zone” as they had ran out.

The request was approved on Feb. 18, and on Feb. 19, the Canadian Armed Forces delivered the rations. 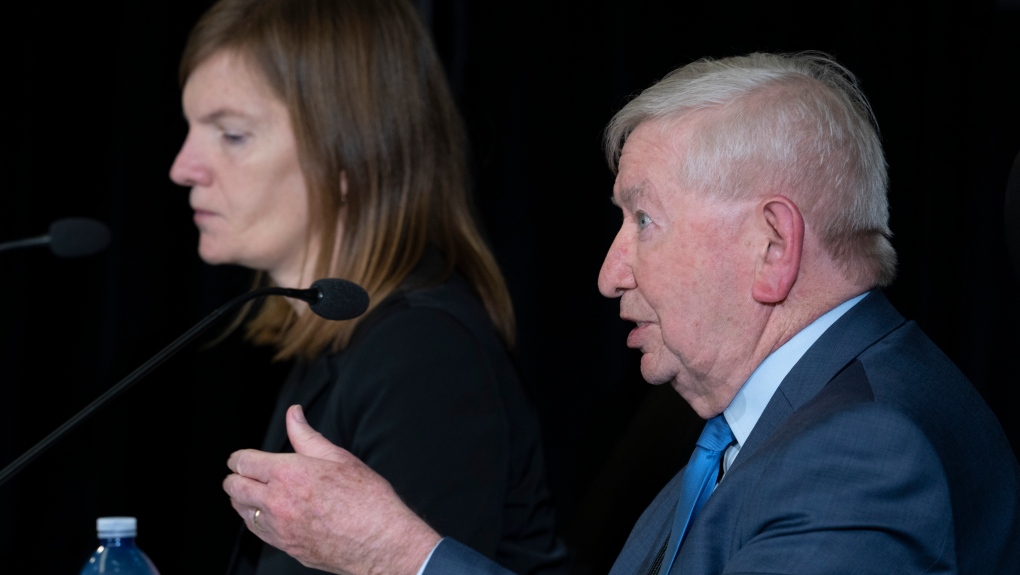 During the Global Affairs Canada-focused testimony, the witnesses were asked about an email sent from a senior Global Affairs official on Feb. 14 that made note that the “top level messaging” Canadian officials were discussing within that department on the day the Emergencies Act was invoked.

Asked to speak about this sentiment Termorshuizen said: “One of the things that we are always worried about is Canada’s reputation abroad. And that’s for a number of reasons. From an economic perspective, we’re a very trade and investment-dependent economy… So we need to maintain a strong and positive reputation as a place where people can safely trade and invest and do business. And part of that sort of positive trading and investment climate, is a climate where the law is respected. And so, clearly what we were seeing during this period was very significant defiance of the law, at both significant border crossings and in some of our large cities, including Ottawa.”

Familiar face back on top

'For the master of the universe ... it's going to be a difficult year:' Wall Street bonuses expected to plunge 45%

‘The View’ Punctures “Clown” Marjorie Taylor Greene’s VP Hopes: “It Will Not Be Her”

How to stop big tech spying on you