The final week of hearings at the Public Order Emergency Commission is set to be a blockbuster one, as Prime Minister Justin Trudeau, a trio of his top staffers, and several members of cabinet will be taking the stand.

On Friday, the commission confirmed that top Trudeau staffers had been added to the witness list to speak about their involvement in enacting historic powers to bring the “Freedom Convoy” protests to an end: Chief of Staff Katie Telford, Deputy Chief Of Staff Brian Clow, and Director of Policy John Brodhead.

Over the last five weeks, the commission examining federal government’s invocation of the Emergencies Act heard testimony from 62 witnesses, and pored over heaps of documentation.

In examining what led up to the invocation, the commission has learned about the impact on Ottawa residents and city council, the dysfunction in the Ottawa Police Service, and the chain of command and information sharing struggles the OPP and RCMP had.

The hearings also painted clear pictures of the frustration that came from Ontario government’s apparent lacking involvement, the convoy organizers’ power struggles and grassroots social media origins, the priority put on the border blockades for economic and diplomatic reasons, and the incredible amount of federal bureaucracy involved.

All of this is set to culminate next week as the ultimate decision makers take the stand.

Expected to testify on Monday will be top officials from the Canadian Security Intelligence Service (CSIS) and the Integrated Terrorism Assessment Centre.

Then, according to the commission, here is the order of witnesses expected for the rest of the week:

Ahead of this final phase of testimony, here’s a comprehensive recap of the key moments from the last five weeks.

THE CITY OF OTTAWA AND ITS RESIDENTS

The commission’s hearings began with a focus on the lived and largely traumatic experience of downtown Ottawa residents and the concerns business groups had in their dealings with the city and police, as well as the perspectives from local councillors whose wards were occupied by protesters and transport trucks last winter.

Then, the commission heard from top city officials about the “many failure points” in the local response. 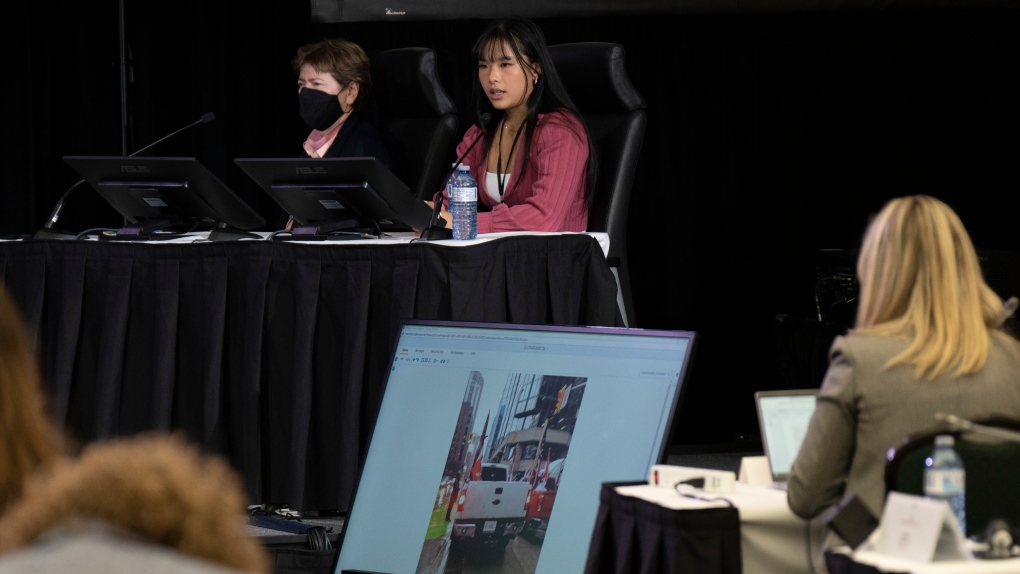 Witness Victoria De La Ronde listens as Zexi Li speaks about a photo she took during the protest at the Public Order Emergency Commission, in Ottawa, Friday, Oct. 14, 2022. THE CANADIAN PRESS/Adrian Wyld

This section of testimony touched on the early warnings Ottawa received but seemingly dismissed from hotels, and the blowback from Hill security over the City of Ottawa’s attempts to make a deal to move trucks.

It was during former Ottawa mayor Jim Watson’s testimony that the first major political revelation came: Trudeau told the mayor he thought Ontario Premier Doug Ford was “hiding from his responsibility… for political reasons.”

As the commission turned its focus to police forces, the political and personnel dynamics at play behind the scenes were illuminated, and documents provided new insight into the kind of intelligence police forces had about the “Freedom Convoy” as it rolled across Canada and landed in the nation’s capital.

Speaking of intel, it was around this time that an OPS “intelligence assessment” came to light amid during the hearings, that raised some eyebrows. 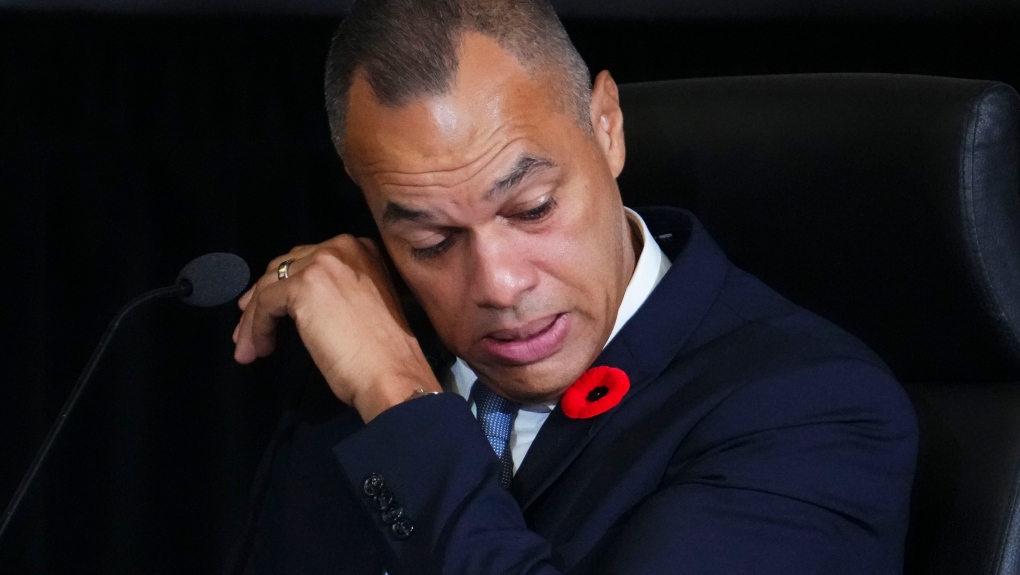 Former Ottawa police chief Peter Sloly wipes away tears as he get emotional while appearing as a witness at the Public Order Emergency Commission in Ottawa, on Friday, Oct. 28, 2022. THE CANADIAN PRESS/Sean Kilpatrick

And then former Ottawa Police Chief Peter Sloly spent two days on the stand, getting emotional when he talked about how he thought the on-the-ground officers were “doing their very best” amid what he later called “a theme park in the middle of a public safety crisis.” He also sought to explain his “may not be a policing solution” comment.

Then it was the OPP’s turn. During this phase of testimony, the commission heard contradictory testimony over tow trucks and broken telephone over intelligence warnings, and about RCMP Commissioner Brenda Lucki texting her OPP counterpart about trying to “calm” ministers down amid an apparent loss of confidence in police.

THE CONVOY ORGANIZERS AND PROTESTERS

Moving from the policing view to the protesters’ perspective, the commission then spent a few days fixated on testimony from “Freedom Convoy” protest organizers and their supporters.

From descriptions of a “power struggle” between various factions of protesters and prodding the motivations of the organizers and efforts made by some to keep the protests peaceful, to the role TikTok played in sparking the cross-Canada convoys, the commission got an earful on the first day of this phase of testimony. 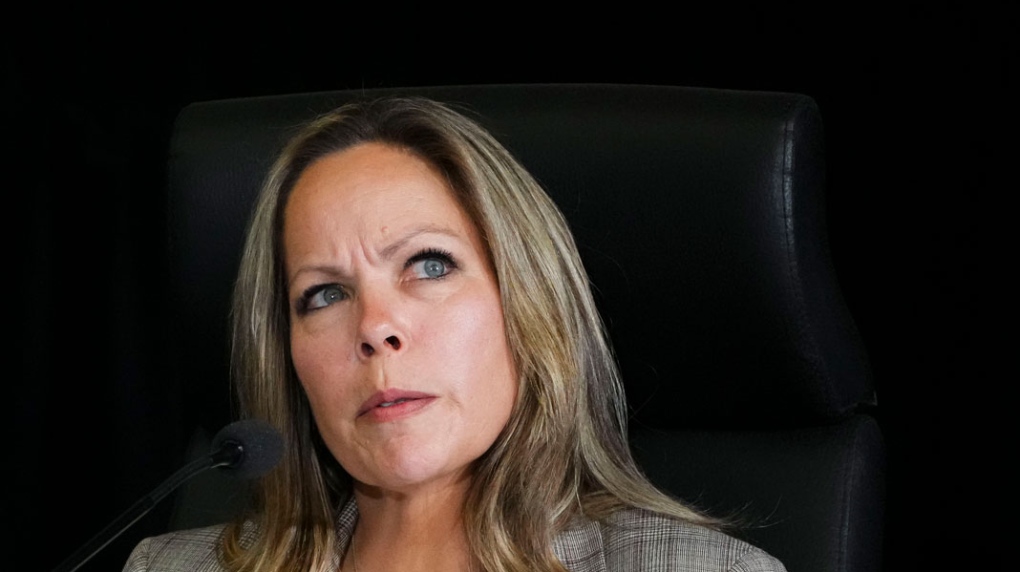 Tamara Lich appears as a witness at the Public Order Emergency Commission in Ottawa, on Friday, Nov 4, 2022. THE CANADIAN PRESS/Sean Kilpatrick

The issue of that “memorandum of understanding” then came into sharp focus, with a few key protest players making clear cases for why they thought that idea was overblown “legal nonsense.” The same day the commission heard accusations of police forces passing protesters intel, and learned of reservations some had about Pat King’s presence, and other “hangers on” presumably looking for a cut of their crowdfunding cash cow.

Tamara Lich then took the stand and was accused of having a “selective” memory when it came to recalling the events that unfolded in Ottawa. On the heels of this, arrested protesters shared what started as sunny and exciting protest experiences, to what it was like to be arrested.

Then, speaking from custody, Jeremy MacKenzie made repeated efforts to try to downplay or dismiss previous testimony before the commission about Diagolon—a controversial online community he leads—being an extremist entity.

THE BORDER BLOCKADERS AND RESPONDERS

It was then border blockade time, where protesters, police officers, and municipal officials were heard from.

From documented CSIS concerns that invoking the Emergencies Act could drive protesters towards violence, to the pressure Ford was feeling from major companies to see the blockade end—to the point he mused about getting all up in the OPP’s business—here are key moments from the Ambassador Bridge-focused hearings. 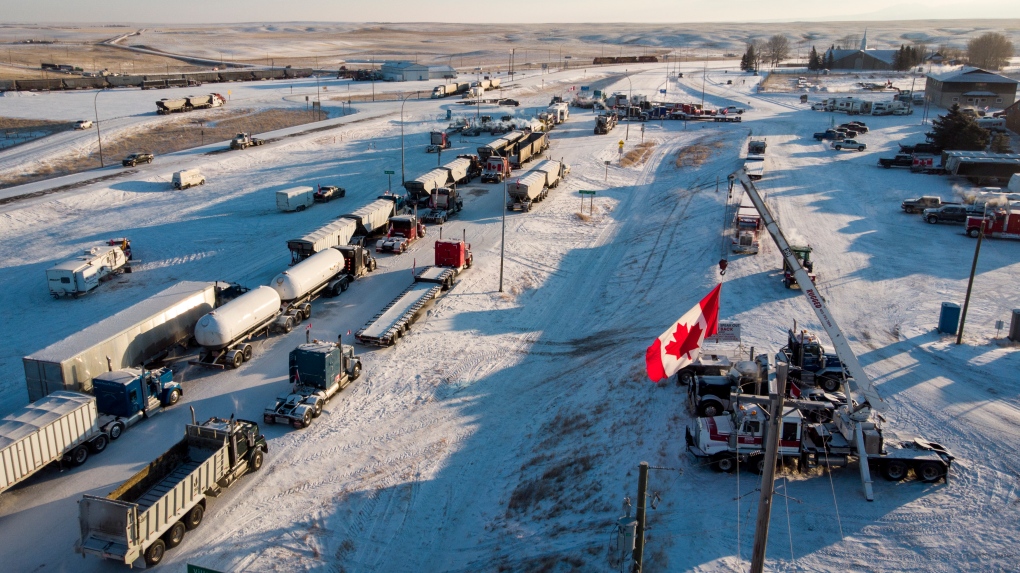 And, from texts the mayor sent accusing then-premier of Alberta Jason Kenney of “ignoring the province being held hostage by domestic terrorists,” to protesters wanting Trudeau to come and address them, here are they key takeaways from the Coutts, Alta-focused testimony.

Lastly, week four focused solely on the federal government, the unelected side, to be specific. Moving through top officials from nearly all involved federal departments and agencies, the commission heard about how the decision came to be to invoke the Emergencies Act.

Former Public Safety Canada officials testified about not foreseeing that the convoy would be as big and stay as long in Ottawa as it did, and about how they thought there were shortcomings in the information and intelligence gathering.

The same day, Global Affairs folks touched on the international dynamics, and disinformation surrounding the protests, concerns about foreign crowdfunding efforts, and the made-in-Canada convoy damaging the nations’ reputation abroad.

During this hearing, it came to light that CSIS didn’t view the “Freedom Convoy” protests as a national security threat by definition, but Trudeau’s National Security and Intelligence Adviser Jody Thomas sure did.

When RCMP Commissioner Brenda Lucki took the stand, she sought to defend why she didn’t more forcefully tell cabinet about police tools and plans that could have been in play pre-invocation. The embattled top Mountie also made her case for why it’s time to codify rules for what constitutes political interference, to avoid future controversies.

The commission also heard about how Finance Canada was concerned about the lasting economic consequences of the convoy, while Transport Canada estimated $3.9 billion in trade activity was held up by the whole affair.

Then on Friday, top Privy Council Office (PCO) officials testified that after taking a no-stone-unturned approach to trying to find a way out of the weeks-long Ottawa occupation, not all options were exhausted before cabinet pulled the lever enabling the unprecedented powers that came with declaring a national public order emergency. That’s because not all other options were adequate, according to PCO Clerk Janice Charette.

FEDS STAND BY, REPORT DUE IN FEB.

Throughout the testimony and the revelations and insights it has offered, the federal government has stood by its decision to invoke the Emergencies Act, a move it has repeatedly described as a measure of “last resort.”

When the commission was struck in April—on a tight timeline to complete its work— it was given a mandate to examine the circumstances that led to the use of the Emergencies Act as well as the measures taken through it to deal with the emergency situation.

The intent was to come away with findings regarding the “appropriateness and effectiveness” of the measures taken by the government.

In his introductory remarks, commissioner Paul Rouleau said that the focus will remain “squarely on the decision of the federal government.”

The expectation is that the final report to Parliament will inform how to prevent similar events from happening again, and will advise on whether the Emergencies Act and connected regulatory framework need amendments.

Once the public hearings conclude next week, the policy phase of the commission’s work will begin.

The week of Nov. 28, the commission will conduct a series of round-table panel discussions with experts in various fields. Each panel will focus on a common theme or set of questions, with input from the groups and individuals who have been granted standing.

The inquiry will then turn its attention to compiling all of its evidence and findings into a final report.

The commission is required to submit this report to the government with all of its recommendations in both official languages by Feb. 6, 2023.

The government then has to table the report in the House of Commons and Senate, by Feb. 20, 2023. 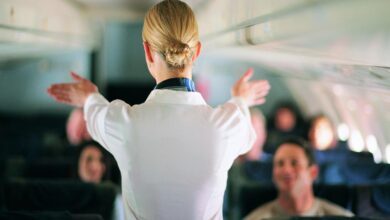 I’m a flight attendant — here’s how to get free booze, extra legroom onboard 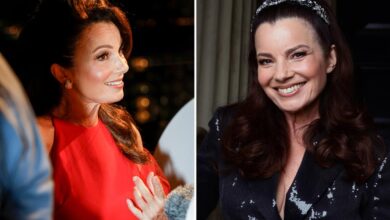 Fran Drescher opens up on staying healthy as she gets older 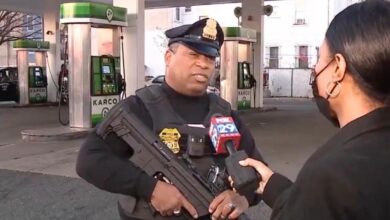 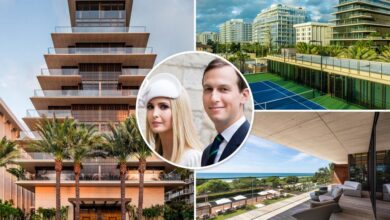 Ivanka and Jared’s luxe Florida rental to list for $18.8M