MANCHESTER, ENGLAND- The mother of a newborn baby allegedly murdered by Lucy Letby has told how she heard his “horrendous” screams and saw blood around his mouth when she walked in and found him alone with the nurse.

The woman, who can’t be named for legal reasons, told a jury that she was left “frightened” after seeing her five day-old son because she “knew something was very wrong.”

Letby, 32, who is on trial in the United Kingdom, is accused of murdering seven babies and attempting to murder 10 others at the Countess of Chester Hospital’s neonatal unit during a year-long killing spree between 2015 and 2016.

The jury was previously told how the mother had walked by as Letby was in the process of killing one of her twin sons — known as Child E — by injecting him with air.

Letby is said to have attempted to kill his brother — Child F — the following day by injecting insulin into a nutrition bag.

Giving tearful testimony, the mother said she’d gone to the neonatal unit to give milk to her twins, who were both on incubators next to each other in the same room.

She said: “I could hear my son crying, and it was like nothing I had heard before.

“I walked over to his incubator to see he had blood coming out of his mouth. I was panicking because I felt like there was something wrong. It was a sound that shouldn’t have come from a tiny baby. I can’t explain what the sound was,” she continued. “It was horrendous. More like a scream than a cry. I could hear it on the little corridor.”

The mother said she’d gone to comfort her child, “but it hadn’t worked” and he’d carried on crying until she left 10 minutes later.

She’d asked Letby what was wrong with her son, and the nurse had told her that the bleeding had been caused by a feeding tube rubbing his throat, the court heard.

A court sketch shows Lucy Letby appearing at  Warrington Magistrates’ Court via videolink.  November 12, 2020. The neonatal nurse is accused of murdering seven babies and the attempted murder of another 10 has appeared in court.
(Credit: SWNS.)

The mother said she accepted the explanation but was still concerned, although she’d then returned to the postnatal ward as instructed by Letby.

“She was in authority and knew better than me, and I trusted her completely,” she said.

But on her return she phoned her husband because she “knew something was very wrong” and was “frightened.”

Child E’s condition deteriorated, and the mother later returned to the neonatal ward and found medics trying to resuscitate him.

She said her son’s death had left her “broken” and she’d been unable to bathe him afterwards so Letby had done it instead.

Letby had placed Child E in a white gown, and the mother said she remembered “being thankful because we had no clothes for him because he was so little.”

The mother said Letby later gave her a picture she had taken showing Baby F hugging a teddy bear that had belonged to his dead brother.

“She presented me with a picture. She said: ‘I got this picture. He rolled over and hugged [his] bear. I thought it was so amazing, so I took a picture for you.’”

Earlier, the mother told the court how she believed her twins were both doing well after being born premature by Caesarean section.

“I thought they were in good condition for their gestation,” she said.

She said she’d been later given the impression by staff that both were “well enough to travel” and could be moved to a hospital nearer to her home.

“I was still sensitive, sore and fragile [from the birth],” she continued, “But I was absolutely over the moon because the boys were perfect.”

She was cross-examined by Ben Myers, defending Letby, who said he “disagreed” with the mother’s version of events.

Cheshire Police in the U.K. search the home of Lucy Letby in 2018, when they found handwritten notes that were shown to jurors this week.
(Peter Byrne/PA Images via Getty Images)

He said Letby had not been alone with Baby F when the mother walked in but was accompanied by a doctor.

And he questioned whether the liquid around his mouth was blood or actually aspirate — matter that had been drawn from the baby’s body by suction.

The trial continues on Tuesday.

Ian Leonard is a freelance journalist who reports on UK news for Fox News Digital. Ian has contributed articles to The Times, The Daily Telegraph, The Guardian, Daily Mail, The Sun, Daily Mirror, and many others. He’s also worked as a producer for BBC Radio 5 Live. He can be followed on Twitter @iancleonard 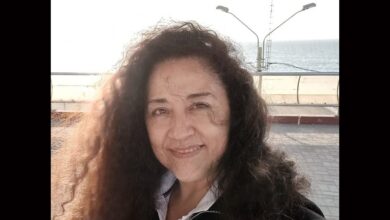 As Venezuelan Antagonists Talk, the U.S. Softens Its Stance

For Mexico, an Unlucky Seven